Controller is one of the most important component in an MVC application since it acts as a coordinator between the view and the model and also handles the users requests.The user’s request is received by the controller which requests the model to perform different CRUD operations ,based on the request, and then decides the result to return to the user.

In the case of web forms there is a direct relationship between the URL and a file on the server’s hard drive as the requested file is requested by the user and is part of the URL.

In MVC there is a decoupled relationship between the requested URL and the controller class used to serve the request.The client just makes a request using a URL and it’s the responsibility of the MVC application to pass the request to the appropriate component or the controller which will handle the request.

This decoupling makes changing the URL structure easy as the user is not aware of the file which actually serves the request.This is also good from the encapsulation point as the internal details of the application are not exposed to the outside world.

The mapping between the URL and the controller class,which will handle the request, is the responsibility of the URLRouting module which is an HTTPModule.

WebForms page is executed when requested by the browser

The routing module in mvc decouples the controller from the request

From the URLRoutingModule the request is passed to the Controller which contains the action methods which actually handles the request.Once the request reaches the controller ,it decides the model on which to perform the operation and then decides the result which needs to be returned to the client.

Usually we have a controller class for every major feature our application provides.

So controller is where we write the code to serve the requests.Following are some of the important characteristics of controllers. 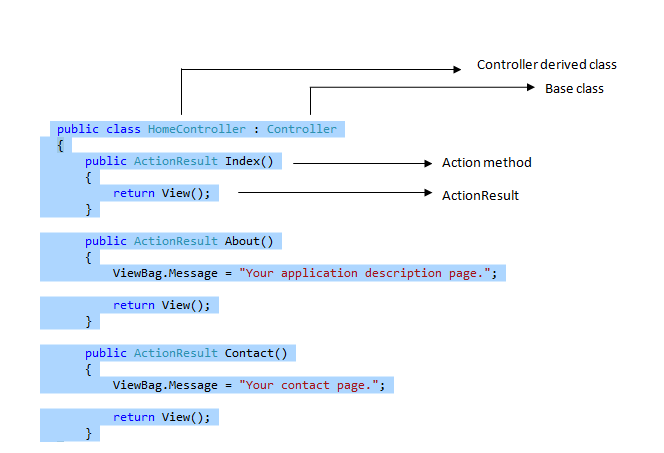 ControllerBase implements the IController interface ,which is required to be implemented by all controllers in MVC.Also it defines a few important properties that we can access from the action method such as

Some of the ActionResults and helper methods are

So as we have seen Controllers in MVC are responsible for handling the application logic.We can use the framework provided controller classes or if we need fine grained control we can create and plugin a new controller class by directly implementing the IController interface.