Unit testing means testing the smallest unit of code such as method or class in isolation to other methods and classes in the application.But if we have a method which creates an object of some other class or calls another method then this could make the method difficult to unit test.If we test a method which depends upon other classes or methods then we are doing integration testing and not unit testing.

Though we can comment the database access logic in our method,this is not an ideal solution as the unit test will test the modified code and not the original code.

One solution is to write a mock class which can be used instead of the original database access class and this mock class will not hit the actual database.We can implement this by programming to interface in our method.

So if our method is using the database access layer class then instead of directly creating an object of this class we can pass the dependency using an interface to the method.The advantage of this approach is that we can easily pass another database access class ,or even our mock class,instead of always passing the same class.

To use the Moq mocking framework in our application we need to follow the below steps:

1. Add a reference to the Moq

To use the Moq library in the project we need to install  Nuget package for Moq. 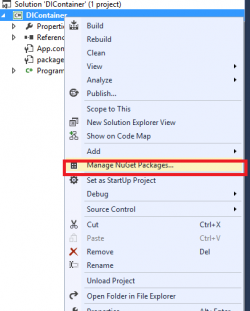 This will add the required references for the Moq framework to the project.

We need to tell Moq what type of object we want to mock.We do this passing the type parameter to the Mock generic type as:

above line tells the Moq library that we are mocking the “TypeToMock” type.

So we create a mock object for a specific type.

4.Setting the expectation or behaviour

Moq uses lambda expressions,generics and delegates which makes Moq suitable for .NET applications.To define the behaviour we use the Setup method as:

The above line demonstrates some of the important concepts used in the Moq mocking framework.The three main methods used above are

On running the above code we get current system datetime ,as returned by the mock object

In the above example we are setting the expected behaviour for the GetDateofJoining() method.We are passing the return value to the Returns() method.

Using Moq for unit testing our code provides a means to test otherwise difficult to test code. Following are some of the advantages of using a mocking framework such as Moq:

We sometimes need to unit test methods which consists of hard to produce scenarios.Common example of such scenarios are:

Tests execute faster as we are accessing the mock object instead of some external resource such as database.

We don’t need to repeat the mocking code if use a mocking framework such as Moq.While if we write the mock classes and methods manually we need to repeat the same code which is a violation of the Don’t Repeat Yourself or DRY principle.

To provide mock implementation of a non existent class : While developing our application we often come across scenarios where some class is not yet developed.We usually throw NotImplementedException in such a scenario.To avoid this situation and still run our application we can mock the non-existent class.Once the original class is developed and tested we just need to replace the mock object with the original class.