Following are some of the MVC Interview Questions and Answers for Experienced.

These questions are commonly asked in interviews and will also help you to get better understanding of the framework.These are some of the MVC Interview Questions and answers for experienced people.They cover some of the most important topics in MVC.

These mvc interview questions are segregated into different groups,so you can go through them when you are trying to brush up the main concepts in MVC.

2)What are the advantages of MVC?

MVC encourages developers to implement the application using separation of concerns.This means that you can easily update either of the three components : model , view or controller without impacting the other components.

For example view can be changed without the need to change model or controller.Similarly Controller or Business Logic in your Model class can be updated easily without impacting the rest of the MVC application.

Since the components are independent so you can easily test the different components in isolation.This also facilitates automated test cases.

c)Full Control over the generated HTML

MVC views contains HTML so you have full control over the view that will be rendered.Unlike WebForms no server controller are used which generates unwanted HTML.

3)What are the main differences between ASP.NET WebForms  and ASP.NET MVC?

4)Is there ViewState in MVC?

5)What is Routing in MVC?

We can depict the role of the routing engine with the following diagram:

Routes are declared in RouteConfig class which is in the App_Start folder.Route consists of Route Name and URL Pattern.If the incoming request matches the route then it is handled by the specified action method and controller.

Suppose you request  for the URL http://samplesite/home/index and you have declared the route as below.This request will be handled by the Home controller’s Index method

6)What are Action Methods?

ActionResult is a class which helps in creating decoupled application.Instead of returning specific type of result action method return an object of type ActionResult.

Some of the classes deriving from the ActionResult are: 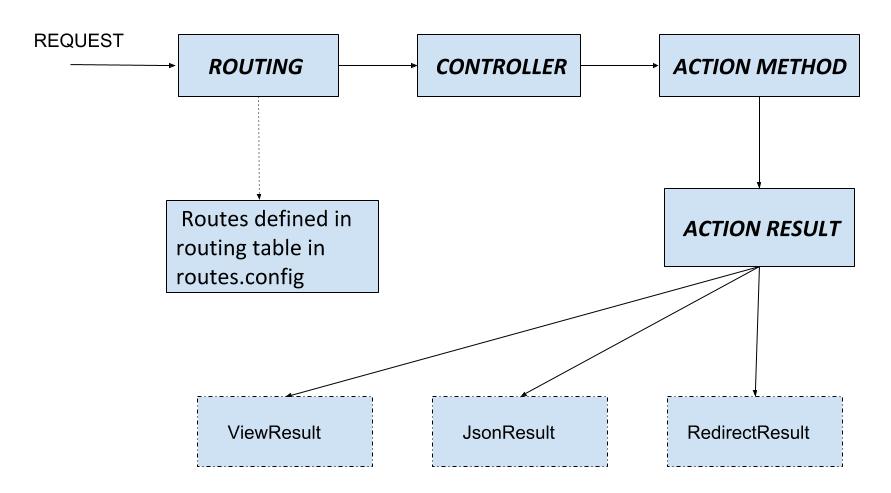 8)What are HTML helpers?

This question is almost always asked in MVC interview:

9) Can you overload action methods?

You can overload action methods by passing the method name in the ActionName attribute as:

now you can declare another action method with the same name as:

Filters are executed in the above order when multiple filters are attached to an action method.

For example to apply authorization filter we apply the attribute as:

Exception filter executes last,after all the other filters have executed.

12)How do you implement authorization in MVC application?

Authorize attribute is used to control access to controller and action methods.For example we can restrict access to Details method to only authenticated users:

It has different parameters using which you can control who can access the controller or action method.For example you can declare that only Administrator users are able to access your Controller methods

Razor has the following features:

14)How to return JSON response from Action method?

16)How do you generate hyperlink?

Using the Html.ActionLink helper method hyperlink is inserted in view.If you pass the action method name and controller name to ActionLink method then it returns the hyperlink.For example to generate hyperlink corresponding to the controller called Organization and action method called Employees you can use it as:

17)What is OutputCaching in MVC?

OutputCache attribute can be applied either to individual action methods or to the entire controller.If you apply it to the action method then the response of only that action method is cached.

18)How do you manage unhandled  exceptions in Action method?

Before using HandleError you need to enable custom errors in the web.config file:

HandleError has few properties which can be used for handling the exception:

21)What is Model Binding?

22)How can we implement validation in MVC?

For example to implement validation for the Name property declared in a class use:

you can use html helper for the above property in view as:

23)What are ViewData, ViewBag and TempData ?

ViewData is a dictionary of objects which are set in the action method and accessed in the View.ViewBag is a dynamic type,so it can define any property which could then be accessed from the view.Dynamic type is part of C# since C# 4.0 .

This question is commonly asked if you have some work experience,more than 3 years, in developing MVC applications.

24)What is the flow of the Request in MVC application?

At a high level we can depict the flow of the request with the following diagram:

This is just a high level overview of how a request is handled by MVC application.To summarize following happens to handle a request: 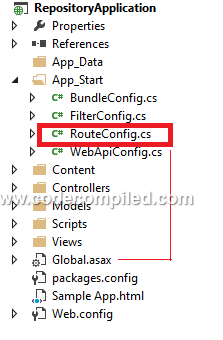 The RouteConfig.cs contains the RegisterRoutes method which is defined as

The above method is called from the Application_Start method of the Global.asax as:

26)Which assembly contains the ASP.NET MVC classes and interfaces?

27)What are strongly typed Helpers?

In the case of normal helper methods we need to provide the string values to the helper methods.As these are string literals so there is no compile time checking and also intellisense support is available.

The above razor block will set a common layout for all the views.We can include our own code also in _Layout.cshtml which we want to execute before the code in any of the view executes.

For defining the UI elements which are common for multiple views in your application you use _layout.cshtml.It is added to the shared folder in the views directory as it is shared by multiple views.

29)What is MVC Scaffolding?

It is a code generation framework for ASP.NET applications There are p reinstalled code generators for MVC and Web API projects in Visual Studio.It allows to quickly add common code such as code which interacts with data models.

Some of the features included in MVC5 are

31)What is Bundling and Minification?

Bundling and Minification is used for improving the performance of the application.When external JavaScript and CSS files are referenced in a web page then separate HTTP Requests are made to the server to fetch the contents of those files.So for example if your page references files called Common.js and Common.cs in a web page as:

Bundling reduces the number of HTTP requests made to the server by combining several files into a single bundle.Minification reduces the size of the individual files by removing unnecessary characters.

You can enable Bundling by setting a property called EnableOptimizations in “BundleConfig.cs” in App_Start folder.

32)What is attribute routing in MVC?

33)What are Ajax helper methods?

Glimpse are NuGet packages which helps in finding performance, debugging and diagnostic information.Glimpse can
help you get information about timelines,model binding,routes,environment etc.

35)How can we prevent Cross Site Request Forgery(CSRF)?

To prevent CSRF we apply the ValidateAntiForgeryToken attribute to an action method:

In MVC 6 ,the three frameworks,WebAPI ,MVC and SingnalR are merged into a single framework.Also in MVC dependency on System.Web is removed.It provides features such as:

These are some of the most important MVC interview questions and answers which you should know when attending MVC interview.These questions will not only help you with the interview but would also help in understanding MVC. better.